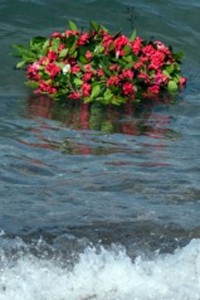 I have been genuinely, touchingly moved beyond words by the crisis amongst refugees and peoples in places all across our globe.  Heartbreakingly shattered by the stories of people who are living in worlds that I cannot even imagine. I am unequivocally dismayed by scenes of devastation and wretched living conditions that scroll across my screen. I am overcome by the faces I see with looks of horror and fear. I am moved beyond words at the lives subsisting and surviving on a fraction of the money that my own children’s wallet’s hold.

I cannot even imagine what Alan Kurdid— and Galid, his brother, experienced on that voyage that led to their eventual demise. What living misery their father will hold in his heart from here until the hereafter. I can’t even imagine.

The other night, I was going through our basement looking for items to sell in a yard sale. It was a time-consuming task because our basement is CHOCK FULL OF TREASURES (that are deemed otherwise meaningless without a basement to hold them all). When I was getting ready for the yard-sale, I just felt stunned with the excess. We have too much. We have so much, we need to de-clutter, downsize, cut down, reduce. We are overstocked in this house.

So yesterday, when I was standing there in that yard sale site looking for dimes, and quarters and loonies and toonies to compensate me for the clothes and trinkets on my table, I had two thoughts pop into my head.

Thought # 1: it is quite unbelievable that I am living in a part of a world that affords me excess ‘stuff’ that I can then sell to make more money so as to “bolster my coffers”.
Thought # 2: it is inconceivable that the money I made at this yard sale today (which probably meant more to me than money earned elsewhere because I had to work hard for it—and all while sporting a pounding headache from lack of sleep…earning my wages one scrawny nickel and dime at a time)…inconceivable that this influx is more than some people make in a year in some of these war-torn countries.

In reading Timothy Keller’s (2010) book Generous Justice, I have been considering the whys surrounding doing justice. And in a nutshell, we must do justice because all humankind “from a treble white to a bass black is significant on God’s keyboard, precisely because every man (and woman) is made in the image of God” (Martin Luther King (1965) in a sermon entitled “The American Dream”). But why are we blinded to this truth, even in our part of the world? Why is it so hard for us as humans to see one another through eyes of love and compassion, caring for one another as brothers and sisters as part of the same human family? Partly, it is because we lack a love and respect for those who do not share in our experience. We find it hard identifying with those who are different. We crave familiarity and similarity. We love comfortable. We detest that which is awkward and difficult.

Keller (2010) states that many people who call themselves Christians do not demonstrate a social conscience, full of love and compassion, for those in need. Traditionally, the ways that an appeal has been made to the public to arouse concern for people in need has been through guilting and shaming. Keller infers that we are shamed for being born in a free country and shamed for the wealth we have accumulated. This shaming sometimes brings about a mindset of change, but often this is accompanied by resentment which makes the effort short-lived.

A better way is to connect justice to grace. What the world proclaims “unworthy”, Grace declares precious. And this: because Grace covers, Grace cares and Grace meets the needs when nothing else can.  Grace will light the path for those who have been given much so that we can walk toward those in distress. So that we can shoulder the burden along the path. So that we can accompany those in distress so that they are not alone. For there have been times when we ourselves were in need.  Might we never forget: but for God’s Grace, where would any one of us be.

Life is hard. But Grace is powerful, able to overcome even the most heartbreaking of circumstances that life throws our way.

Why must we do justice, developing an awareness of the needs in the world around us? Because quite simply: if we say we love God and turn our backs on His people, we are hypocrites.  In this world, we are His Hands and His Feet.

James 2:15-17:
Suppose a brother or a sister is without clothes and daily food. 16 If one of you says to them, “Go in peace; keep warm and well fed,” but does nothing about their physical needs, what good is it? 17 In the same way, faith by itself, if it is not accompanied by action, is dead.

God, let our faith be revitalized by a call to action, seeing one another as You see us. Valued, precious and fully-loved.