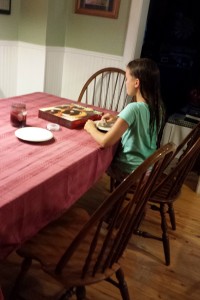 It’s indoor recess. I am making the rounds, and uncharacteristically, having a fairly easy time of it. I head into each classroom, make some small chat and then move my way along to another room to do more of the same. I arrive in one room where a student sits at his desk, a scowl on his face. I crouch down beside him to chat.

“Go away,” he says forcefully.

Undeterred, I maintain a calm demeanor and persevere.

“I haven’t chatted with you for a while, how are things?” I ask, smiling hopefully.

I am a little taken aback, but still undeterred. I walk out of the room. Collecting my thoughts, I think of an idea, turn on my heels and then go back to him again. It is an idea that I hope connects.

Take two. I offer him an opportunity.

In thinking of care, I am reminded that not all the ways I offer care will be accepted. In fact, I don’t always offer care that students may want right now…or even want later. Sometimes the best care you can give a student is to listen and learn. Not act, not do, not react, not offer. Just listen.

In listening that day, I realized that for the caring process to be completed, the student has to receive my care. Not return it: just receive it.

The best care I could give in the above scenario was to listen and give time for this student to return to a state of calm himself. Not pushing, not expecting. Not even offering judgement.

Because waiting is a way to care when we don’t know what else to do.

Nel Noddings (2005) talks about care being reciprocal. That sounds like a mutual effort, in which I care for you and then you care back for me. But in caring relations, the reciprocal just simply means received. During caring encounters, Noddings (2005) describes the state of consciousness of the one-caring as characterized by attentive receptivity and a desire to respond in a way that furthers the cared-for’s purpose or requirement at hand. The cared-for’s consciousness is then characterized by reception, recognition and response. “The cared-for receives the caring and shows that it has been received” (Noddings, 2005, p. 16). Thus, the recognition that the one-caring gets in return from the one being cared-for is what completes the caring encounter, providing a completion of the encounter.

Care, according to Noddings (2005), is a relation, connection or encounter between two or more persons, with one person acting in the role of caregiver and the other (s) acting as the receivers of that care (p. 15). For this type of connection to be characterized as a caring one, the care given by the caregiver must be received by the cared-for; if this does not occur, the encounter cannot truly be called a caring relation.

Noddings (2005) continues:
When we care for others, we attend and respond as nearly as we can to expressed needs. When we have to refuse a request— because we lack the necessary resources, find the request unwise, or even evaluate it as morally wrong— we still try to support a caring relation. It can be very difficult, but our purpose is to connect with the other, to make both our lives ethically better— not to overcome, defeat, ostracize, or eliminate him (Noddings, 2005, p. xxv)

A request to ‘leave’ is an expressed need. So is the request to ‘go away’. I also perceived that this student needed time and patience from me as well. When I gave it, it was received.

And thus, a caring encounter had occured— regardless of the outcome.

Advertisements
« A Better Question
This Is My Story »