We were biking tonight, the girls and I.  Previously, I had just finished cleaning up supper when the boys and D. arrived on their own wheels.  It was a night just calling us to the trail- to wind blown hair and rosy cheeks.  To wishes made at sunset. We hopped on and formed a line.  As we pedaled down our road with the setting sun at our backs- heading toward the cousins’ house, I noticed something small and iridescent lying on the ground. Something perfectly formed but completely motionless.

It was dark blue- with maybe some green, maybe some red- and it was lying on its side, its straw-like beak just a thin line of black colour. Its eyes were open; as it was on its side, the one eye we saw was like a miniscule black bead. Its wings folded tightly into its abdomen.

There was no sign of injury. No sign of life either. My girls and I stopped to gaze in admiration at this tiny marvel. How something so small could captivate our attention gives tribute to this marvel of nature. Says something of its benevolent Creator.

I was so intrigued, that as I rode on I started to think more deeply about this little creature. And after a few moments of quiet captivation, my imaginations ran a little wild, as they have a habit of doing. I started to wonder out loud about the life of this tiny bird and question where it came from- thinking about what had happened moments prior to its untimely death and speculating whether or not it frequented the nearby neighbours lovely gardens and bird houses situated quaintly on their veranda. This little bird and its unfortunate demise- a bird known as the smallest of all the types of birds found in the world- was something noteworthy to me. Something worth paying tribute to.

A being worth remembering.

All this has made me wonder further. Such a fragile, delicate bird.  Can it live a life of beautiful intrigue- only to slip into death and still be worth one’s while in remembering?  And if so, how much more then might we as human beings be valued the same? Worth thinking about, wondering over, imagining, pondering, remembering, considering and meditating on? Worth something? Worth the time and effort and patience and deliberation and cost it takes to cultivate a life?

For each sacred life is full of an intrigue all its own- and the stories we tell are never as revealing as the ones we keep in the safety of our hearts. Each life a mystery, a wonder. But still I wonder…are we living our lives as if they were intriguing? Do we really know and understand how incredibly valuable we are? How precious? How important? And are we taking care of these exquisite lives we’ve been given as if we believe this to be true? Believing that our lives are worth caring for as though they were extraordinary?

For that is what they are.

We were on our way to the yard sales Saturday morning when our van was halted at the lights on North River Road: a GrandFondo cycling event with approximately 300 riders was ushered through by police escort. In case anyone reading this is unfamiliar with an event of this type (as I was until I Googled it): a GrandFondo is a biking event for riders that is not a race- it is a road course. And one can take a competitive approach or otherwise- depending on the preference.

I watched the first hundred riders or so go by- and they looked like the typical racers you might expect at a serious biking event. But as the next hundred passed by, it became increasingly clear that there were many and varied bikers taking part in this event.  One gentleman in particular caught my attention. He was dressed in a bright red tank top and shorts- no brand names or trendy biking shorts worn as attire. And he had a long flowing mane of silver hair. A striking head of hair.  It truly flowed behind him as he pedaled. I was so surprised and interested in that hair, that before I could think about what was coming out of my mouth, I said to the kids, “Look at that guy!”

I immediately regretted drawing attention to him, feeling somewhat like I had made a spectacle of him to my offspring. But as I began answering their questions about the bikers, I realized something about The Man With Silver Hair in the Red Tank Top. I noticed him because he was intriguing.

Like the little hummingbird, he caught my attention. And his presence on that road course Saturday morning gave me pause to wonder and imagine about his own unique life and story- a story that led him to live an intriguing life that unfolded in myriad ways until he was led to cross paths with me. And all because I had arrived at the intersection just a little too late.

Nothing is happenstance. And no one is a mistake.

Live your life as if it was intriguing. For it really is. 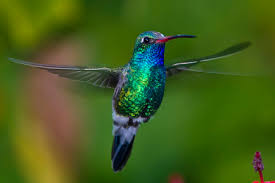 Here are ten interesting hummingbird facts and general information about hummingbirds as taken from http://www.worldofhummingbirds.com/facts.php :