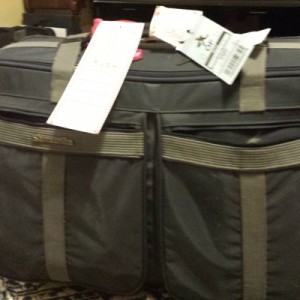 Recently, a friend ordered some flooring from Home Depot. When the product that had been promised and then reserved for my friend was found to be in short supply, one of the employees for the depot offered to drive out of province so as to get the additional flooring and then bring it back to the store, so as to make the order fit the demand.

But when a company’s services dismally fail to meet their client’s expectations, you’ve got to wonder how they can continue to stand by empty promises built upon reputable company slogans that strive for excellence. Slogans such as these:

“Make Every Customer Feel Valued” and “Act with Integrity” and “Drive For Excellence“.

If I told you this was directly from Air Canada’s website, would you have known it was this particular airline provider making the claim to match the three previous descriptors?

I know I would not have known.

But I do like to keep an open mind, so it was with expectant hopefulness that I booked a return ticket for a recent speaking engagement in Ohio, U.S.A, doing so through Air Canada. We had some air miles from Air Canada’s incentive rewards program to use up, so I decided to go this route and book my ticket.

{I am now left to wonder if air miles flights are synonymous to ‘bottom of the barrel’ tickets, because that is how I feel I have been treated. But I digress.}

I booked my tickets online and arrived for my 5:30 a.m. flight with enough time to make it through the line and toward the queue forming to board the airplane. I had one checked bag which I had watched the attendant make a ticket stub for and then affix to the bag. As I watched the bag ascend slowly up the conveyor belt, little did I know then that I would not see that bag again. I still don’t have it in my possession even as I write this complaint letter… two and a half weeks later.

I arrived in Toronto on schedule. But unbeknownst to me, my bag was still in Charlottetown. I was unaware of this inconvenience until I reached a certain stage in the Connecting Flights queue (a stage in the flight process where one is unable to proceed without having observed that their checked bag made an appearance that it had been traced, as observed on the super-sized screens affixed overhead).

I was stalled while I searched for an attendant who, when approached, then whipped out a hand-held device that confirmed to me for the very first time that day (but not the last) that indeed my bag was missing in action. He assured me that I would find it and these things happen all the time. (Cue the eye-roll).

I was then directed to go speak to a man at the other end of this very large room, all while customers filed passed me towards their awaiting flights. While I, meanwhile, stood anxiously waiting, whilst a very bored baggage claims officer asked me quite disinterestedly about my lost luggage.

“Making Every Customer Feel Valued?” I’m not so sure.

Meanwhile, I was now late for my connecting flight. I waited at the very end of a long line so as to queue for Customs. I then again waited at the end of another long line inside Customs as I waited to speak to an officer. And it was only as I tried to fix a buckle on my shoe that I heard my name being called on an overhead intercom that it was the last call for me to make my flight.

I sprinted for what must have been 2 kilometers. I swear.

When I finally arrived for my connecting flight, breathless and heavily panting (read: fresh as a daisy), the airline hostess at the desk actually radioed out to the plane for them to cancel the flight sequence so that (this very sweaty, tired and frustrated woman)… ‘er, so that I could board the plane.

I still knew I had no bags. But I had made the flight with zero seconds to spare. It was Ohio or bust.

When I eventually arrived at my destination, I exited the plane and after a series of wrong turns, I went to the Baggage Claims office and again filed my missing luggage. I gave them descriptors and contact information, and in return, I was given the hopeful prospect that my luggage would be on the next flight.

That’s what she said.

So began my fruitless journey in trying to locate my luggage. I started by first calling Air Canada’s 1-800 number, oh, about a billion times. To no avail. Each time I called, I was told that my bag was on the “next flight”. It was not, of course, nor would it seemingly ever be. As the days ticked by without luggage, I was begrudgingly given a $ 100 dollar clothing allowance (after I got my Husband involved in the fiasco), and for good reason. I had no clothing other than what I was wearing, that day I left, plus one skirt. My second day presenting at the conference with the same outfit would have shut the show down.

Of course, that money I was promised has also yet to appear.

The most frustrating part of all this was that I called Air Canada the night before I knew I had to return home, and I told the airline baggage claim personnel on the other end of that phone line that I would no longer be looking for my luggage to be delivered. I asked them to please return the suitcase home to PEI. That is: if it was ever located.

Wouldn’t you know it. After flying out of Ohio myself on a Saturday morning at 6:00ish, my bag finally arrived at my destination a few hours later. Three days later than I was ensured it would arrive. Three days too late. And, joy oh bliss: it arrived in the rain, waiting for ‘who knows who’ to pick it up off the back doorstep of my hostesses’ porch.

She found it about seven hours later.

Well, I know I could not do have found it. I was now en route to P.E.I.

“Act with Integrity?” You could have done so much more, Air Canada.

The past two weeks have been an exercise in frustration, a game of endless phone tag, a waiting game of wondering if I have been forgotten. I have already colored my grey hairs once. Found two new ones cropping up this morning: Air Canada now also owes me a free hair coloring.

And also over the past weeks, I have been in (limited) contact with representatives of Air Canada residing on P.E.I., but no one has seriously and conscientiously been following up on my file. Every time I call the local number, I am met with the following response, “Oh, I have been off for a few days. I am surprised that this file is still open.”

Really? Shouldn’t you all know it is open if YOU ARE THE ONES FOLLOWING UP ON IT.

“Drive For Excellence?” I think not.

I have, to date: invested about 20 hours into calling, writing and filing claims. Spent money on phone calls and postage. I owe someone a six dollar parking ticket fine (wink, wink). And all this being a modest estimate of my time and the headaches that have incurred.

I am not looking for the moon here. I just want my suitcase back in one piece.

Is that too much to ask, Air Canada?

Advertisements
« For the Bitter and the Sweet
Who will your character be? »