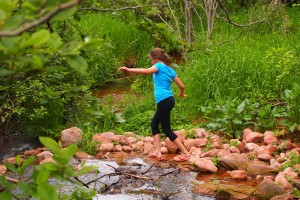 When he gets frustrated, he uses the puppets to talk out his feelings. We role play, he and I. This is not time for academics, paper and pencil. This is pure, unadulterated imagination. He needs it; oh, how he needs this opportunity to freely play. Unstructured. Liberated from the confines of classroom protocol, even if but for mere moments. He talks to me with his hands, showing me that he needs this time to unwind. To imagine. To portray. And I am listening carefully, reading in between the blurred lines, so as to understand all the reasons why this matters so very much.

A while back, another one used to wander the hallways. He never seemed to have a sense of commitment to any one room, any one place. Flitting here and there, we would find him where he was least expected. Now he spends that time that he formerly used to wander, playing. He pretends that he is a ‘cop’ or a salesman. He makes intricate creations out of chain links. He reads books and plays office. He loves to imagine, and his teachers report that the behaviours that were formerly front and center have vanished. Could it be because of play?

These little people, young learners: they crave the time allotted for play. The boys do especially, but certainly the girls too. Each day, when that time comes- when that hour arrives: they relish it like it is their last supper. When playtime is over, they ask, “It is over so soon? It’s already done?” It seems unbelievable to them that their beloved Centers have now ended- as it appears to them that play only had just begun. That’s how it is with playful learning, how it is with inquiry-based learning: time passes along and you don’t even know where it has gone.
Play is just that subtle and unobtrusive in scope, yet vital and necessary in its impact to really make the difference between children doing well and children doing poorly.

According to Christina Hoff Sommers of Time magazine,

“Prolonged confinement in classrooms diminishes children’s concentration and leads to squirming and restlessness. And boys appear to be more seriously affected by recess deprivation than girls. “Parents should be aware,” warn two university researchers, “that classroom organization may be responsible for their sons’ inattention and fidgeting and that breaks may be a better remedy than Ritalin.”

“Fidgeting is a real problem. It is a strong indicator that children are not getting enough movement throughout the day. We need to fix the underlying issue. Recess times need to be extended and kids should be playing outside as soon as they get home from school. Twenty minutes of movement a day is not enough! They need hours of play outdoors in order to establish a healthy sensory system and to support higher-level attention and learning in the classroom.”

According to a document drawn up for the Canadian Council on Learning by Early Childhood Education Program Chair, Par Jane Hewes, play is undervalued and all children’s opportunities for free play are under threat (both for the boys as well as the girls). She says:

In recent years, the trend has been to introduce more content via direct instruction into the practice of early-
childhood professionals. Research demonstrates that this approach, while promising in the short term, does not
sustain long-term benefits and, in fact, has a negative impact on some young children.17 Long uninterrupted
blocks of time for children to play – by themselves and with peers, indoors and outdoors – are becoming increasingly rare.  The developmental literature is clear: play stimulates physical, social, emotional, and cognitive development
in the early years. Children need time, space, materials,and the support of informed parents and thoughtful,
skilled early-childhood educators in order to become “master players.”18 They need time to play for the sake
of playing.

She goes on to add the following:

There are unique and fundamental developmental benefits that derive from spontaneous free
play. The child’s experience of intrinsic motivation in play is fundamental to successful life-long learning. Play is a valid learning experience in and of itself – albeit one that has been difficult to justify and sustain in formal educational settings.

I don’t know the all the reasons for why kids are finding school to be a place they feel lost. But I can imagine that if I were a child, I would probably not be able to get through my day without a diversion of some sort. Some kind of escape that could whisk me away from reality even if only for a moment or two. That’s why teens and adults love social media so much- it is our chance to play. We all need an outlet in our life, and for most of us, we find that relief from the busyness of life and reality through play, whatever ideal that particular form of play conforms to.

“Young children learn the most important things not by being told but by constructing knowledge for themselves in interaction with the physical world and with other children – and the way they do this is by playing.”
Source: Jones, E., & Reynolds, G. (1992).
The play’s the
thing: Teachers’ roles in children’s play, p. 1

With this in mind, can’t we just let the children play?