Speaking of normal parenting things we did last night…

We watched home videos, together, on the couch— in an act of complete and utter solidarity.

God bless us everyone.

{And we, as amatuer writers these days have been clarifying in these spontaneous blog posts, that emerge out of nowhere on our FB pages, signing pacts solely amongst ourselves: that everything we write in this great time of uncertainty is purely fictional, based on characters from a Harry Potter book. Or some such novel geniusness with lots of room for creative license. Just stating the parameters of this high sophistication, so we are all clear and on the same page.}

Let’s just say…that some “people” were having some “moments”. And let’s just ALSO say that maybe “some people” had just pitched their Monopoly Deal cards on the kitchen table, upon seeing that Mom might win the game, she having acquired the sly deal apparatus card that is highly coveted and sneakily hidden in hands until needed.

If you have never played Monopoly Deal you have not yet lived.

And, although Monopoly Deal is “life” right now (and I am not even kidding), let’s just finally say that “some people” almost had to take a prohibited drive, and break the isolation rule, dropping off kids like used flyers, at the neighbours’ curbs.

Just saying. Again, this is all purely fictional writing.

So, when things hypothetically start to fall off the rails in our house, and tensions run high: we break out the home videos. It works like a charm to restore peace and good will. Not even kidding.

Something Husband and I are discovering in watching these old, home videos is that we actually did not suck as bad as we thought at parenting. This is a real concept. One Husband and I have discussed many a time after watching about three hours of tape rolling across our screen.

One video last night chronicled my eight-year old daughter doing gymnastics in what could only be referred to as the parlour, were this blog post written circa 1850. Said daughter danced, cavorted and flipped all over the nether regions of this fancy room, a room outfitted with the many mismatched ornaments and such placed on the fireplace mantle and elsewhere throughout the room, while random family pictures, placed here, there and everywhere, lined the walls.

In what was the surprising feature of this little snapshot in time, Mom enters the room, offering tips on how “said child” could improve her technique, encouraging even MORE of the acrobatics already exhibited, the mom setting her daughter up with various cushions and pillows by way of a support system, placed haphazardly against the wall. And of course, all totally approved by the COHSR.

Not only did Mom permit this flamboyant Cirque du Soleil acrobatic consortium, she collaborated in it.

What the…? Was she drinking Purell?

The following scene, in the home video playlist, then showed “said” child flopping over like a limp stalk of celery, again and again, as the mother’s makeshift gym apparatus showed fail after fail, for consecutive runs. That would be: takes one, two and three.

Let’s just say (as we’ve been saying a lot here), that THIS mom was left just sitting there last evening, dumbfounded, mouth hanging open like a stunned chimpanzee, astonished by the fact she had come across as even TRYING to be a good mom, via the evidence of the living room taking on the life of a home gym—all so very comforting.

Wow. She was…good. Not even half bad, to be honest.

If the evidence supports the verdict, this mom did not just put in her time at the gig: she nailed it.

I only share this little bit of Southern Comfort with you all to say this: Moms. Dads. Parents of all ages. Gramps and Grans. Aunts and Uncles.People everywhere.

Are you alive this morning?

Is there breath in your lungs?

Did you drag yourself from the bed to the table and back to the couch?

Did you look fondly upon your child?

You are right on the money, Mama. You hit the ball out of the park, Daddy.

You want to know how to remember whether you were parenting well, carrying out your stellar parenting duties to the maximum?  Being a good mom or dad (never mind what the kids say)?

Break out the home recording devices.

Record these moments in time for posterity. These moments, right now. Record them. Someday you will look back on these moments in time, these days of your lives, and you will see the effort you have put in, see the schedules you made, observe the house forts you permitted to be built, laugh at all the funny fails. You will remember the homeschooling (God helps us).

And you will remember: I was it! I was that good parent. I was okay! The kids survived! And while I might not have been stellar, I was mediocre.

Even more than this, our collective mediocrity at this time in history is more than enough.  Actually, it is just the right thing, for our kids.

All they remember, anyway, are the ways we made them feel. 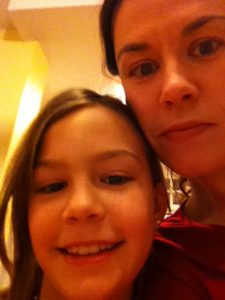 Advertisements
« Comfort: I Find it in the Books
Dear Students Everywhere… »