Advertisements
This time of the year, with winter’s melt and spring’s thaw, one has to watch where one steps. The ground is soft, mushy and squalid.
Although tempting to wear that bright, new pair of sneakers you ordered off the clearance rack on The Shoe Company website (that cute and airy, light-blue pair of Adidas that would make your feet feel like a million bucks), one instead slips on the worn, black pair of “in-door” sneakers that are castaways from one of their daughter’s defunct school year supplies. Never to be noticed again (except by mom).
It is what it is, man.
Oh April! Your ground is untrustworthy and unpredictable; one can never take too many precautions when heading out into your wide, blue horizons.
And just like the uncertain ground on which I step for afternoon and evening walks, I have found myself walking dangerously ever more closely to that murky pit, that slime that sucks us under, called comparison.
Comparison.
By another more telling name, it is judgment. And to judge means to indicate the faults of another person in a critical, disapproving way. Not as nice a sound as comparison, unfortunately. But it is revealing of the nature that can lie beneath good intentions.
There is a way to be critical and perceptive. Being critical is not necessarily a negative thing altogether. Toni Bernhard (2011) said this about the difference: “Discernment means perceiving the way things are, period. Judgment is what we add to discernment when we make a comparison (implicit or explicit) between how things or people are and how we think they ought to be. So, in judgment, there’s an element of dissatisfaction with the way things are and a desire to have things be the way we want them to be.”
I guess what I find, at least for me, is that one can start out with the desire to be discerning (the best of intentions in mind and a desire to remain neutral and perceptive), but one can so easily slip to the other side on that murky territory, that uneven playing field called judgment.
*Judgement: when we see someone else doing something we would not do, and we strike out emotionally/verbally against them.
*Judgement: when we disapprove of another’s actions and we quietly hold it against them.
*Judgment: when we carry a grudge toward someone because of something done for which we think or feel was wrong, flawed, illogical, incorrect, off target and erroneous. The former, a best case scenario, I am afraid. At its worst, we see this person as a traitor, an enemy, an adversary.
Judgement. It oozes with condemnation. It is just seeping with negativity.
And yet, in spite of its unattractiveness, it is such a steady, constant practice to avoid stepping ever closer to that slime that sucks you under.
See, the thing is: when you step into muck, it encases your shoe. Your foot feels heavier and it weighs you down. It holds you back. It is the same with judgement. It is burdensome. It keeps us from seeing the beauty amidst the murky, prevents us from noticing the arresting amidst the dull. 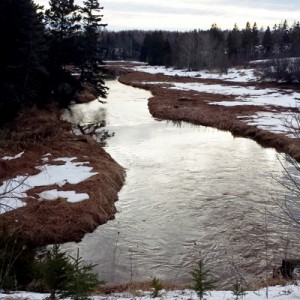 Thoreau said it well:
“It’s not what you look at that matters, it’s what you see.”
So what I choose to see, in spite of what lies dangerously around my feet (that sludge of the season)?
It is the beauty.
I choose to see the beauty.
It is everywhere—just look, my friend, and you will find it.
Advertisements
« Good News
No Tears »