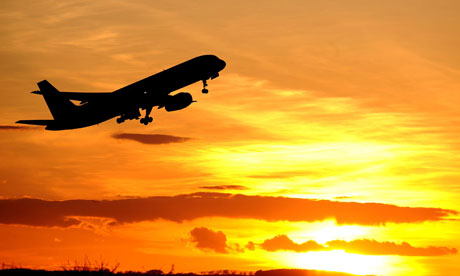 There is a catch in her voice. I can tell by her tone that the tears fall freely down her cheeks. She tells me her Youngest Boy has just flown out this morning at 6:00 a.m. and that she woke in time to stand on her deck and watch the plane circle and fly overhead. Heading for distant places, distant spaces- far, far away.

We marvel at this modern wonder- that a monstrosity of aluminum and steel observed as a speck in the sky can lift a precious Loved One into the air and beyond is at times astonishing to the amateur. That this same Loved One might be oblivious and unaware that his devoted mother stands guard, watching- is equally astounding and noteworthy.

But tell me this: if a plane flies overhead with your child aboard and that same child is unaware that you stand alert and attentive from far below, is this noteworthy? Significant? Is this ordinary happening complete with any meaning?
Does it matter?

Monday morning, Youngest and I travel home from Charlottetown at dinner time and pass by Sister’s house where her two young boys play outside. The youngest boy stands at the foot of the playhouse while his older brother looks down from the loft. I imagine the conversations that are transpiring. I watch for a brief blip of a second after which Youngest and I again remark that it is interesting that these two loved boys are not privy to our watching. They have no idea we are even in the area- for all they know, we are in our own surroundings located the two hour’s drive away. Not breezing by on the highway that runs in front of their house. It is at one and the same time unnerving that we can be watched unawares and yet a strange comfort to know that the people who love us might be watching our comings and goings.

Yes. This has been a week of watching. We watch the world respond to Robin William’s death, the killing of Missouri teen Michael Brown, the killing of John Crawford III in an Ohio Walmart. We observe in horror as Sunni militants terrorize and overrun so as to create an Islamic Empire in northern Iraq even as clashes are ongoing along the Gaza Strip. Crisis is still very much the word in other parts of the Middle East, including Libya and Syria. Some have even said that with all that is going on currently, things are more dangerous in that part of the world than they ever have been at any time in the past. These are dangerous times. There is much to watch and much to pray vigilantly for.

Even as these crises of epic proportions are going down in far-flung parts of the world, little wars are being waged here at home. Little battles being fought. A mother’s body struggles to accept her chemo, a child has just been diagnosed with a rare disorder, a new cancer patient has just been delivered the news. A woman struggles to accept her mental illness. A father grapples with dire financial straits. People are lonely, afraid, anxious and hurting, and it doesn’t take a rocket scientist to state that there is pain in the world.

Life is happening all over the place and one has to wonder- is anybody watching? Who is attending to all this pain and anguish?

As I walk the country mile this evening, watching burnished grain blowing gently in the breeze, I consider this notion of watching/being watched. And believing as I do that I am watched over by One whose eye is on the sparrow- whose hand has counted every grain of sand, every hair on my head, I feel a comfort. Comfort in imagining His hand as holding me in the hollow- safe from any harm that was not meant to come my way. Comfort in knowing that I am being kept. Preserved. For such a time as this.

For I am safe even in my freedom to come and go.  To be myself. Even as the storms rage around me, threatening to dismantle and upend.

Last Friday, I was pulling out on a busy stretch of highway in Charlottetown. I had all the children with me and we were heading in town having just left my mom and dad’s house. For whatever reason, a large four-by-four pulled up on the inside shoulder of the road, blocking my view of the highway. Having believed that the coast was clear, I pulled out into oncoming traffic. As I did so, I could see several vehicles barreling straight for my path of entry in the very lane I was pulling into. For a moment, I panicked. And then quickly manovered the van off the road until it was safe to pull out again.

Someone was watching us even as we were unaware.

Someone saw us. And I realize that our safety and protection in this instance, while significant, are not the real story. The story is not necessarily that we were protected (as wonderful as that is), but that we were watched. We were in His view. Someone is out there in very much the same way as Daughter and I were attentive to my nephews on that Monday morning, as my Mom was aware there on her deck and as many of us in the world are holding space for the millions of displaced, disadvantaged, hurting, wounded, suffering people in this world.

This I know: Someone is out there- and He is standing watch. Keeping vigil.  And as He keeps watch, I am held Held in the very hollow of His hand.

Safe, secure and kept.  And all because He’s watching.

click here, you can enter your link and view this Linky Tools list(Powered by Linky Tools)…